Wednesdays with Coach Tim: Understanding How to Train

There are a ton of great resources with tips for beginners in BJJ. To avoid redundancy, Coach Tim has come up with some pointers that we haven't seen anywhere else.  We've also included some basic pointers, since many of you may be so new to the sport that you haven't gotten into other blogs yet.

Obviously, this is not an exhaustive list! In fact, these tips may be harder to adopt than advice given in other columns. On the plus side, these tips are not only for beginners, but they are tautologies that can carry a student through black belt!

1) Brazilian Jiu Jitsu is a tactile sport, not a visual one -

We are often exposed to Martial Arts through striking disciplines, such as Karate, Muay Thai or Boxing. In these arenas, most of your skill development is centered around your visual acuity being tested against your opponent's (speed of strikes, speed of reaction time, speed of footwork, etc).  In Jiu Jitsu, however, we are responding to tactile cues. The placement and removal of weight / pressure, the application of torque, the removal of slack from a system, etc. Long story short, the skill we are trying to improve requires that we receive a tactile input and match it with an appropriate tactile output.

What all that blah blah blah above means is: Have your instructor demonstrate the technique on you after you have seen it, if possible. Tim tries to go around his class and do the techniques on everyone if there is time, because the slight differences in pressure and the order in which we acquire an anchor, use it to apply torque, re-anchor, re-torque, etc. is very subtle and often difficult to see or understand from an explanation.Practice your techniques on your partner and instructor, have your instructor do the technique to you and your partner and continue this triad so you can continuously focus on the tactile input / output instead of trying to understand Jiu Jitsu through visual input / output.

Without an understanding of human movement patterns, grappling movements will initially seem counter-intuitive. This is normal! It can be overwhelming to try of think of what you should do ("Do I move first?" or "Should I wait until my partner moves and try to counter them?") in tandem with what your opponent is doing ("He grabbed my sleeve!" "She's making me fall over!"). Instead of trying to process what you and your opponent are doing and then coming up with your next move, just focus on your own body positioning. You should always feel like you have your balance, your spine (from the top of your head to the bottom of your pelvis) is straight and braced and you feel like you are strong and fast. Regarding the last point, feeling strong and fast in your positions, remember we are not trying to rely on strength and speed; however, if you are in a position where you can normally move 100 lbs., then you should never settle in that position feeling like you can only move 50 lbs., because this means that something (spine, hand, grip, etc.) is misplaced and obstructing your force production.

If you are consistently able to place yourself into optimal positioning, then you don't need to worry about your opponent! Since we are in contact during drilling and sparring, if my positioning improved, then your positioning has regressed. This simple axiom allows you to narrow your focus down in the beginning of your training and makes it easier to understand the purpose of each step in a technique.

Tim started teaching Brazilian Jiu Jitsu soon after he started training (as is natural in class, anyone, even a white belt, can help the less experienced students in certain areas).  Tim had studied Martial Arts since he was 4, and loved showing other children what he had learned.  In explaining Jiu Jitsu fellow students, however, Tim realized that a punch (armbar / guard pass / etc) had become so much more than a punch and a kick had become so much more than a kick.  In explaining techniques to fellow students, Tim realized teaching was giving him greater insight into the art and helping clarify the techniques in his own mind.  Somewhere within Jui Jitsu was a governing set of principles that comprised the architecture of grappling on the whole. It was more important to find the roots of this tree than to foolishly try and memorize the infinite pattern of branches that sprouted from these roots.  In that way, a punch could once again become just a punch and a kick, just a kick.

Those governing principles are the same in every sport, every martial art, in fact, every human movement. Understanding how an anchor can become a brace and then be used to generate torque, which is the determining factor in who controls the space and slack in a grappling match. This control then dictates who will create faults in the other person's positioning, eventually leading to a submission. If this last portion doesn't quite make sense yet, don't worry! That's why we train!

4) Mistaking an Ouchie for an Injury

I was in pretty good shape when I started training. I'd been doing spinning and Pilates classes 4 times a week just over a year, and I was getting really strong. One of the reasons I started training was because I wanted to use my muscles for something. My husband was training, I was getting to know the guys at the academy, and it seemed like it could be fun.

It was so fun. I was completely and utterly exhausted and covered head to toe in sweat the first night, but I insisted on buying a gi and signing up on the spot. I couldn't wait for my next class. That first month of training was the most painful month of my life. Every single thing hurt, but nothing was a injury. I very clearly remember sitting at the kitchen table after training one night, looking at my dinner, and crying. I was trying not to be a drama queen, but I was so sore! I didn't want to pick up my silverware because I knew it was going to hurt! When my husband asked what was wrong, I remember choking out: "This is the hardest thing I have ever done in my whole life."

It is true. BJJ is the hardest physical activity I have ever done in my life. I have had injuries that have kept me from training, but if I didn't train when something felt sore I would never be able to train.

This is not to say you should train through an injury. Rather, you should learn to listen to your body and tell the difference between an injury and the soreness that comes after a hard workout.

5) Declining a Roll Because You are Tired

Rolling (sparring) is exhausting, especially when you first start out. There are several reasons this happens; for me, I was holding my breath during rolls without realizing it. I spent months concentrating on mindful breathing during rolling before I figured it out.

I will hear newer students speculating on how easily they are "gassing out" or "need to work on their cardio." These same students will also sit out half the rolls during the training session because they are tired. How exactly are they going to improve on their endurance and strength if they don't push through it?

Yes, you will get sweaty. Yes, your face will turn red. Your muscles will feel tired and sore. But learn to know the difference between exhaustion and intense training. Push yourself. Some of the best rolls I have had have come at the end of the night when I am so tired I think there is no way I could possibly defend anything or be the least bit aggressive. It is when I am most tired that my technique gets sharper, because I can't cheat on a position by trying to muscle through it.

If you aren't understanding the technique being taught, ask your instructor to help. Most instructors ask for questions on a position after they've demonstrated, and then walk around assisting students. Good instructors will ask the students again, after they've drilled the new position, if there are any questions.

There are always questions! If you have one, chances are the guy next to you has the same question or a similar problem. Additionally, asking questions helps your instructor improve their teaching technique/method and cues them in on details that the class is struggling with that need to be addressed.

Ah, the ego. If you've done some lurking on BJJ blogs or the posts on www.reddit.com/r/bjj, you've seen a lot of talk about the need to train without ego. But what does that mean? Does it mean you should stop trying to get a submission during sparring or otherwise "win?"

It isn't easy. I struggle with checking my ego at the door often. For me, remembering that BJJ is fun, and if I'm not having fun I'm not doing BJJ is the key. If I'm not having fun, chances are I have accidentally let my ego get in the way of learning.

Jiu jitsu is a tough sport to learn.  But remember: 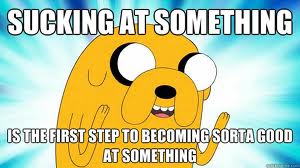 Veronica
I train BJJ with Robot Fight & Fitness in Santa Monica, California. After three years of training, I received my blue belt from Giva Santana and Tim Peterson. I'm fortunate enough to train at an academy that not only has great men to train with, but a strong contingent of women to train with as well. In this blog, I'll be posting tips, tricks, training advice, and other tidbits for newbies to the sport. Keep calm, and train on! Osssss!!